The Enertia Home: A Modern Marvel, or a Lot of Hot Air? 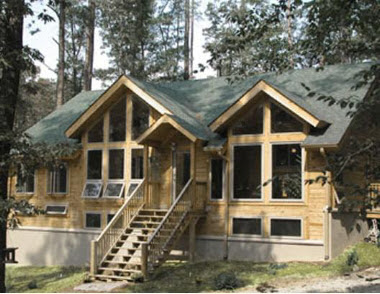 So, now that I've announced a Midwestern focus, I'll immediately stray... but for good reasons.

Last December, I took note of the Enertia Building System, a kit home that its developers claim can be heated and cooled by passive solar energy and a design that upgrades the decades-old "envelope house" concept. I was intrigued, and felt that intrigue was justified when Enertia was awarded the 2007 Modern Marvel of the Year award by the History Channel and the U.S. Patent and Trademark Office. Not long after writing a post about Enertia and the award at Treehugger, I heard from Lloyd Alter, fellow TH blogger and architect. Lloyd wasn't so certain about the promise of this design; the other day, he pointed me to an article from BuildingGreen.com that also expressed some concern about the claims made about Enertia's ability to heat and cool the house space with sunlight and an innovative design. According to writer Tristan Roberts,

The Enertia design’s use of solar orientation, natural ventilation, and thermal mass are timeless and unimpeachable, and with proper implementation should reduce heating and cooling costs in any house. However, Sykes claims that the double-envelope system offers advantages over other passive solar homes. “We’re picking up solar energy and getting it in touch with the maximum amount of wood,” said Sykes. The Enertia design differs from prior double-envelope designs in its use of solid wood, which adds thermal mass; with the timbers prefabricated and cut by Enertia, it offers a log-home-style installation that is fairly straightforward and requires fewer steps than stick-frame walls.

No Enertia homes have extensive performance data, making it difficult to say how well the design works. Tom Miller of 36 Degrees South tested an Enertia home in Durham, North Carolina, under Energy Star protocol, and gave it a score of 67 in the Home Energy Rating System—better than the Energy Star threshold of 85 and the standard home score of 100 but far from the theoretical net-zero-energy score of zero. Miller said that the home’s score may not fully reflect its performance: only the outer wall of the double envelope could be counted, for a relatively low insulation value of R-6, and the beneficial effects of thermal mass aren’t counted in the protocol.

According to data published on the Enertia website, the Durham home has logged a 66% energy savings over a regional benchmark. However, Miller said that when he visited the house it was 80°F (27°C) and humid inside, whereas many people would be more comfortable with the thermostat at about 73°F (23°C) and with reduced humidity.

Miller’s report echoes a pattern that EBN found with other Enertia homeowners—they were willing to tolerate less comfortable conditions than the average homeowner. That kind of habit change is great for the environment, but it makes an apples-to-apples comparison with other homes harder, since any home can use less energy if the occupants are willing to compromise their comfort. Part of Enertia’s apparent virtue may simply be the virtue of its occupants.

That's a long quote, I realize, but it details a problem that will ultimately keep this home from the mass market: most people would love the energy savings, but want to also remain comfortable. While 73 degrees seems a bit excessive, few people will want to live in a warm, humid house.

Of course, that's just one example, but such anecdotal evidence could prove problematic, as Roberts notes there's very little test data available on the house. There's also a potential problem with fire hazard: Enertia claims that the homes inner walls provide an hour of fire protection, and that flame detection equipment is located in the outer section. The article notes that there are still open questions about that, though.

Finally, the homes are built from 100% FSC-certified sustainable lumber. That's a good thing, but a good thing that adds a premium to the price of the house. So, while the Enertia home may be all that its developers claim that it is, without settling the issues above with more authoritative data, it's hard to believe that many homebuyers will pay that premium.

Obviously, this is a concept that will have a lot of appeal on its face, and some of these potential problems may require nothing more than some tweaks in design and marketing. A home that requires no energy other than sunlight for heating and cooling is a worthy goal; one that can, in reality, take great advantage of passive solar design in order to lower energy use significantly will still have an awful lot of appeal, and provide a return on investment for its owners. If the Enertia system can only accomplishes the latter, that's still a step forward. But, of course, they can't use "No fuel, no power... no problem" as a marketing slogan, or claim the home will heat and cool "without the use of fuel or electricity."

Posted by Jeff McIntire-Strasburg at 9:06 PM