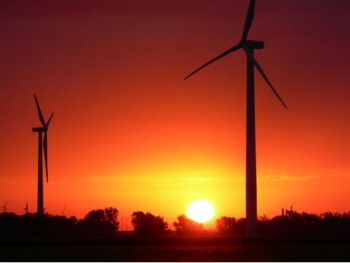 The American Wind Energy Association sent out news today about the Midwest Wind Integration Study, which was required by the Minnesota legislature in 2005. According to the study's results, "...utilities can incorporate wind power into their resource portfolio, comprising up to one-fourth of their delivered energy, without sacrificing reliability and with minor costs for absorbing the wind." While these findings apply only to Minnesota, the idea that wind energy can be delivered economically to utility companies sounds promising for other Midwestern and Plains states where wind is in abundance:

"“The study is especially significant both because of the amount of wind involved and the fact that it was sanctioned by the Minnesota legislature,"” said American Wind Energy Association (AWEA) Deputy Policy Director Mike Jacobs. "“The Minnesota study shows that, when the wind generation is spread around the state, and MISO markets and operators do what they do best, integration costs are a small concern. Like the studies that have come before, this report shows the relative ease in absorbing the wind -- opening the way for wind energy'’s benefits to be reaped on a large scale for consumers, and for our economy, environment, and energy security."

Beth Soholt, Director of Wind on the Wires, said, "The study is an important piece to achieving a higher level of wind penetration in the Midwest. The robust participation as well as the good results will go a long way in advancing wind power in Minnesota and the region."” Wind on the Wires brings together wind developers, environmental organizations, tribal representatives and clean energy advocates to remove bottlenecks in the transmission system and give wind energy equal access to transmission lines.

Given the criticism that's arisen in response to many proposed wind projects around the country, I'm sure this report will be scrutinized. On the surface, though, it sounds really promising. I think it's important to note that this study looked at wind farms spread over a wide area, as opposed to individual locations: I'm guessing that wind generation, like other renewable energy technologies, works better on an expansive scale. Regardless, this is an important step forward -- if wind developers can produce electricity at these costs, it seems like a no-brainer to move forward... What am I missing?