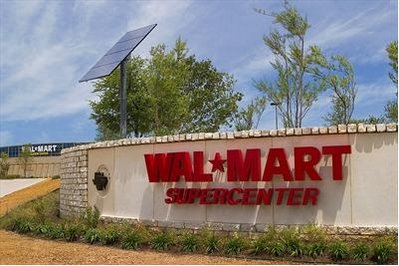 Last year, I took note of new Wal-Mart stores in McKinney, Texas, and Aurora, Colorado, that had a full range of green features incorporated into them, including renewable energy generation, water and electricity conservation, and reused and recycled building materials. While the National Renewable Energy Lab, and the Oak Ridge National Lab will be gathering data on these stores for a total of three years, the company released information today about their findings after year one. So far, things are running smoothly: LED lights and recovery of used cooking and motor oil are one track. Water conservation, xeriscaping, and waste reduction processes are all meeting expectations. And concrete combined with fly ash and slag, as well as other recycled and reused building materials, are holding up fine, thank you very much. The only problem so far has come from renewable energy production systems: mechanical problems have kept them offline for a significant portion of the first year. Overall, the suits in Bentonville are pleased:

"We are taking the experiences and learnings from this first year of the experimental stores and fine-tuning some of these technologies,"” said [special project engineer Bob] Moseley. "“A number of these technologies are already being implemented in new stores and it is our intention and hope that other technologies will find their way into future business plans. By continuing to study, evaluate, and monitor these stores over the next two years, we will learn even more about sustainable technologies. Wal-Mart is very proud to be on the leading-edge of sustainable building and design."

It would be easy to point fingers at Wal-Mart for the things it still needs to improve, but I'd rather congratulate them for making a serious commitment to trying out these technologies. I'm impressed, and do hope these kinds of features find their way into new and old Wal-Mart stores.

The company has also released a cool new web site on its sustainability plans that lays out the goals Wal-Mart has set for itself, as well as the metrics by which it will measure success. Again, I'm pleased with the willingness Lee Scott and associates have shown to create and publicize comprehensive, measurable goals. As always, my radar is on... the trust level isn't quite there, yet. But, I've got to give them credit... they are taking steps above and beyond what many others are doing. According to Grist, they're also getting praise from the right people: Carl Pope, for instance, claimed "None of this is 'greenstanding...' They deserve the chance to show that their business model is compatible with high standards, not just low prices." And unlike the writer of that piece and others, I really don't think Wal-Mart's motivations really matter so much... in fact, we should applaud them for recognizing that "green (sustainability) = green (moolah)." More companies could do well by their shareholders by making this connection...

UPDATE: While I'm pleased with Wal-Mart's progress, I think Wal-Mart Watch's new A Promise to the Environment site and task force is also a good idea. Can't get complacent... ever... scrutiny is always necessary. Via jbell1972 at Hugg.