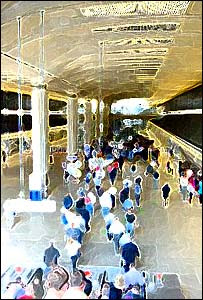 This Wired article (via Hugg) is a few weeks old, but points to a really cool idea being researched in Great Britain: using vibrations from footsteps to generate electricity:

British engineers are converting street vibrations into electricity and predict a working prototype by Christmas capable of powering facility lights in the busiest areas of a city.

"We can harvest between 5 to 7 watts of energy per footstep that is currently being wasted into the ground," says Claire Price, director of The Facility Architects, the British firm heading up the Pacesetters Project. "And a passing train can generate very useful energy to run signaling or to power lights."

Like solar and wind proponents, vibration harvesters argue that abundant, clean energy is all around us and goes to waste. The challenge is how to store the power efficiently so it provides a continual output even if the vibrations from footsteps or passing trains temporarily taper off.

Price has charged Jim Gilbert, an engineering lecturer at the University of Hull, with developing the prototype system for capturing footfall. Gilbert is working with hydraulic-powered heel-strike generators, which he believes could be installed in the floors of busy public places like subway stations. Those stations typically capture the footfall of 20,000 commuters an hour during peak usage -- multiplied by 5 to 7 watts a person, that's more than enough to power a building's lights for the day.

Price, for instance, tried to develop a heel-strike generator for soldiers' boots -- the issues of dirt and water proved overwhelming. Putting the generators in the floor inside of buildings would eliminate many of those challenges, though. Price notes that such developments could save billions in costs related to digging and installation currently required for street lights and other such applications. Seems to me that, at least in urban areas (where I guess this would be most practical), this would also provide the most energy at times when its really needed -- the evening commute, for instance. Here in the US, couldn't you see such a generator working well at, say, the mall or grocery store on Saturdays? I'll definitely try to keep an eye on this one -- very intriguing!